Find out where the best-paid pastors live and how your region ranks.
Aaron M. Hill 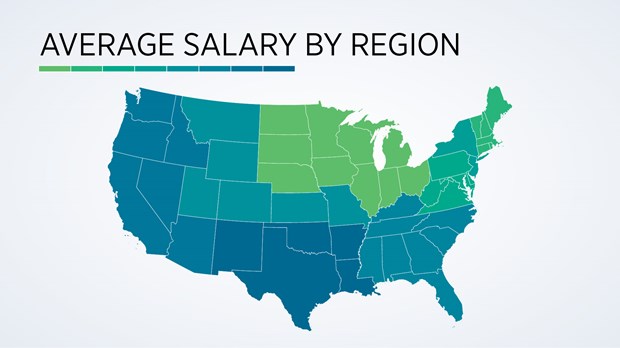 Moving to a new church is hard. Relocating to another state or region is even harder. Aside from the logistical hurdles of picking out neighborhoods and school districts, as well as the hassle of fitting all your worldly possessions in a truck (or two), pastors also need to negotiate a salary.

You might assume that pastors are paid roughly the same across the country. Unfortunately, ChurchSalary’s 2021 Pastoral Salary Report does not support that conclusion.

As part of ChurchSalary’s 2021 Pastoral Salary Report, we have compiled regional maps and charts which detail how salary varies across the United States for seven major pastoral positions:

These regional charts, available to ChurchSalary members, are designed to help personnel teams, church leaders, and candidates evaluate the relative difference of salaries between different regions of the country.

Because budget plays the biggest role in determining a pastor’s salary, with the help of Clarity Research, ChurchSalary normalized compensation data using budget as a variable for the 17,391 pastors in our database, for whom we have location information. This minimized the impact that budget would have on our statistical analysis and enabled Clarity Research to analyze the impact of region on pastoral salaries.

Please note that, because these averages are normalized by budget, they are not suitable for setting or evaluating salaries for individual pastors. They are designed to compare salaries between regions, to observe salary trends, and to prepare churches and pastors for potential relocation and hiring obstacles during salary negotiations.

Across the board, salaries are highest in the Southwest and West. Data for these top two regions are dominated by the two most populous states, Texas and California. By contrast, salaries for pastors are consistently lower in the Midwest. Salaries in this bottom region are more evenly distributed across ten states.

Churches and church-going Americans are not distributed equally across the United States. As a result, low sample sizes and/or high variance in some regions limits the conclusions we can draw. This confidence interval (95%) problem is pronounced in areas of the country that are densely populated and unchurched. Specifically, in our analysis, this problem impacts the New England and NY/NJ regions.

Overall, the eight BLS regions rank from highest to lowest in the following order: 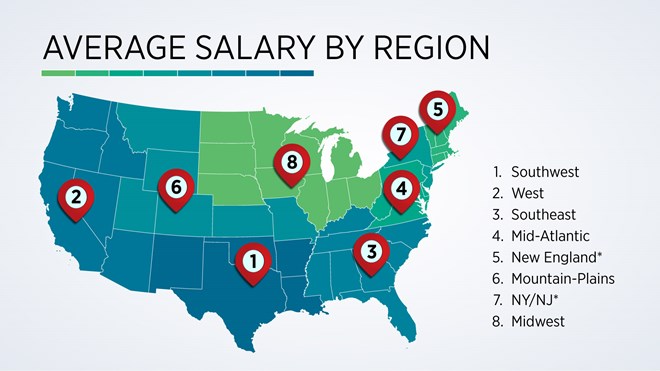 Below are several maps and graphs showing how salary varies by region for seven basic pastoral positions.

Across regions, pay for senior and/or solo pastors spans a wide range or spread (27.4% or $18,679). Compensation in the Southwest (1st) and West (2nd) is significantly higher than even the Southeast region (3rd). The spread between these top two regions and the Southeast is 14.8% or $10,077.

Wide confidence intervals for senior/solo pastors in New England (+/- $4,284) and NY/NJ (+/- $2,685) are caused by high variance not low sample sizes. In other words, even though ChurchSalary’s database contains several hundred data points for senior/solo pastors in these two regions, compensation varies so widely that it is hard to say how “below average” pay in these regions is.

Based on sample size and variability within each region, there are four overall conclusions supported by the data regarding executive pastor compensation. First, salaries are consistently higher than the national average west of the Mississippi—most notably in the Southwest. Indeed, with the exception of New England (whose salary data exhibits a great deal of variability), the average executive pastor salary appears to be higher in the West, Southwest, and Mountain–Plains regions, compared to the other four regions whose states mostly lie east of the Mississippi.

Second, while salaries are higher that average in the West, the distribution of pay is actually right-skewed in that region by executive pastors with large salaries serving at churches with $2-$5M budgets. Third, pay is below the national average in the Midwest, Southeast, and Mid-Atlantic.

Finally, pay is so low in NY/NJ that it almost falls into the middle pay band alongside associate, adult, and music/worship pastors. This is especially obvious when you look at average senior leader pay for both the nation as a whole and the top two regions—the Southwest and West. There may be a reasonable explanation for this wide gap.

Payroll banding groups employees into levels or bands. Each band is assigned a salary range. These bands (or pay grades) create a tiered salary structure.

One possible explanation for lower executive and senior pastor pay in the NY/NJ region is payroll banding. Data suggests that churches in this region may use a less stratified salary structure than rest of the nation.

ChurchSalary’s analysis of the salary structure of all seven major pastoral positions revealed three distinct bands or salary grades for pastors: (top) senior and executive; (middle) associate, adult ministry, Christian education, and worship; (bottom) youth and children. The average gap, nationally, between the midpoint of these bands is around $15,000.

In contrast to this national trend, senior staff in the NY/NJ region—like senior and executive pastors—are paid less, while the figures for other pastors are close to or slightly higher than the national average. The most significant gap between pay grades (~$9,000) seems to divide pastors who lead adults (or the church as a whole) and those who lead youth or children.

In fact, average associate pastor pay is so consistent between regions that there is only a 15.7% spread or $9,305 difference between the first and eighth-place regions. This level of uniformity between regions is significant when you consider that only youth pastor salaries come close with a 16.1% spread or $7,078 difference.

For the 2021 Pastoral Salary Report, Adult Ministry and Christian Education pastors were grouped together as one cohort. These pastors lead a wide range of ministries—senior adults, men’s and women’s ministries, small groups, outreach, discipleship, family and pastoral care ministries, and more. Because they are responsible for ministries of differing sizes, it is hard to draw fine-grained conclusions about regional differences.

And yet, our two overarching trends apply to adult ministry and Christian education pastors: (1) pay is higher than the nation as a whole in the Southwest and West and (2) it is below average in the Midwest.

Much like other pastor positions, the overarching conclusions supported by the data remain the same. Pay is consistently higher in the Southwest and West and lower in the Midwest for music and/or worship pastors.

Interestingly, the distribution of music pastor salaries is significantly more right-skewed than any other position. Meaning that, high-paid worship pastors serving at large churches are pulling the regional average above the median. While pay distribution is almost always positively skewed (or right-skewed) by higher-than-average salaries at the top end of the scale, the skew of worship salaries is pronounced, especially in the West and Mid-Atlantic regions.

Driven by labor laws, youth pastor salaries in the West (California, Oregon, and Washington) are higher than the rest of country. Learn more about how higher minimum wage laws are increasing the overtime exemption for youth pastors and other salaried church employees in Dan Navarra’s two-part series: Crisis Ahead?

The data on children’s pastor salaries are unique and the regional averages buck several trends. First, while the average salary for children's pastors appears to be higher in NY/NJ than the Southwest, the difference between them is not statistically significant. Instead, the data indicates that salaries are, on average, highest in the Southwest and lowest in the Midwest, Mid-Atlantic, and New England. This means that the actual spread is closer to 22.2% or $9,015.

Second, unlike every other position, pay in the West for children’s pastors is very close to the national average, ranking below the Southeast for the first and only time.